2019 could be the best year ever, unless a few tricks get in the way of this bull market. LPL strategists discuss trade tensions, a potential Fed policy misstep, and the weakening U.S. dollar.

With Halloween right around the corner, what are some of the tricks that could get in the way of this bull market?

The S&P 500 Index is up more than 20% on the year, but that doesn’t mean we should be complacent. The LPL strategists note that some of the big worries still out there include a breakdown of U.S.-China trade discussions, the worrisome signs out of the bond market, a potential Federal Reserve (Fed) policy misstep, slowing global manufacturing, and geopolitical risk. From Brexit to populism in Europe, Hong Kong protests, and Japan-South Korea tensions, the list of geopolitical concerns is long and very real.

The Fed is on tap

The big event this week will be the Fed policy meeting, where the Fed is expected to cut rates by 25 basis points (.25%). This would be the third consecutive 25 basis point cut after hiking the rate nine consecutive times. As Mark Twain said, “History doesn’t often repeat, but it often rhymes.”

Looking back at other times when the Fed started off a cycle of rate cuts with three consecutive cuts, we have seen extremely strong performance going out a year. “Don’t fight the Fed” is one of the oldest market adages around, and it very well could play out again.

The U.S. dollar, also known as the greenback, is facing its largest monthly drop since January 2018. The dollar had been relatively strong so far this year, but has taken a decided dip lately. Sparking much of this move has been strength from the British pound and euro. As the likelihood of a “hard Brexit” moves drastically lower, these currencies have spiked. The strategists noted that a lower dollar does have some nice benefits, as it makes U.S. exports less expensive for international consumers. It is also a tailwind for international stocks, which can help diversified portfolios.

The best year ever?

Think about this: Stocks, bonds, gold, and crude oil are all having very good years in 2019. This actually comes on the heels of 2018, the first year ever that all four assets finished lower than the previous year, so a bounce across the board may not be so odd. Still, we’ve never seen a year in which all four assets were up double digits, and there’s a decent chance it could happen this year. In fact, only bonds aren’t up double digits right now, but as our chart shows, they are quite close. 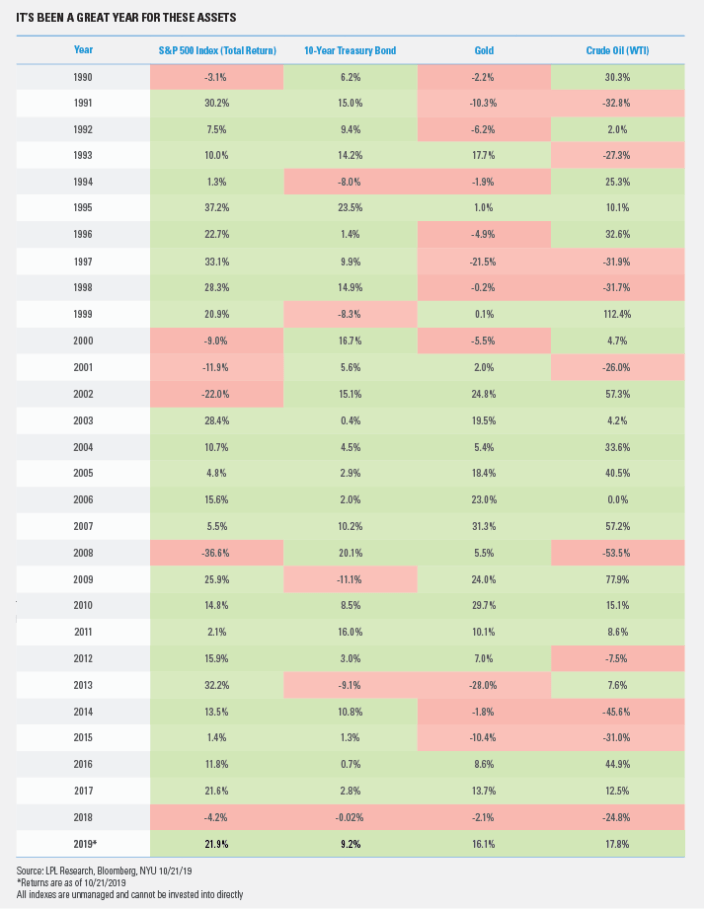 It has been a great year for stocks, bonds, gold, and crude oil. Of course, there are still more than two months to go in 2019, but this year is shaping up to be one of the best years ever for these four important assets.