In this podcast LPL’s strategists discuss the S&P 500’s new all-time high, rate action by the Federal Reserve, and why we think seasonal tailwinds could blow our way for 2020.

For the first time since late July 2019, the S&P 500 Index finally made a new high last week. Positive news from the Federal Reserve and the economy helped push equities higher.

Back at new highs

On October 28 the S&P 500 hit new all-time highs for the first time since July 26, 2019. What now? As the LPL strategists discuss, in the past equity returns actually have been quite strong after reaching new highs. In fact, since November 1982, the S&P 500 has been up a median of 13.5% after a new high, while the median return for all days has been 11.3%. Additionally, the odds of a 10% drop in the six months immediately following new all-time highs are much lower, according to the data.

The Fed gave the market the 25 basis point (.25%) cut that it wanted, but it also made it quite clear there won’t be any rate hikes anytime soon. Of course, if the economy were to begin to weaken, the Fed would be ready to cut. LPL strategists called this a “hawkish cut,” and with the overall economy still on firm footing, three cuts in 2019 has made a lot of sense. Prior to 2019, the Fed had cut rates only 11 times when the S&P 500 was within 1% of an all-time high. When we look at the data, we see that a year after those cuts, stocks were higher every single time. Considering the Fed has now cut three times in 2019 with the S&P 500 within 1% of new highs, this could be another positive sign for 2020.

Best six months of the year

We all know “sell in May,” which is the period between May and October, when stocks historically have done quite poorly. Well, the good news is the November to April period has been the best 6 months of the year for stocks, with the S&P 500 up 7% on average. Breaking it down over the past 10 years, the outlook appears even better, with the S&P 500 having been up 9 of these 10 years and up an average of 8.8%. The risks no doubt will remain, but we believe seasonality very well could be a potential tailwind going forward. 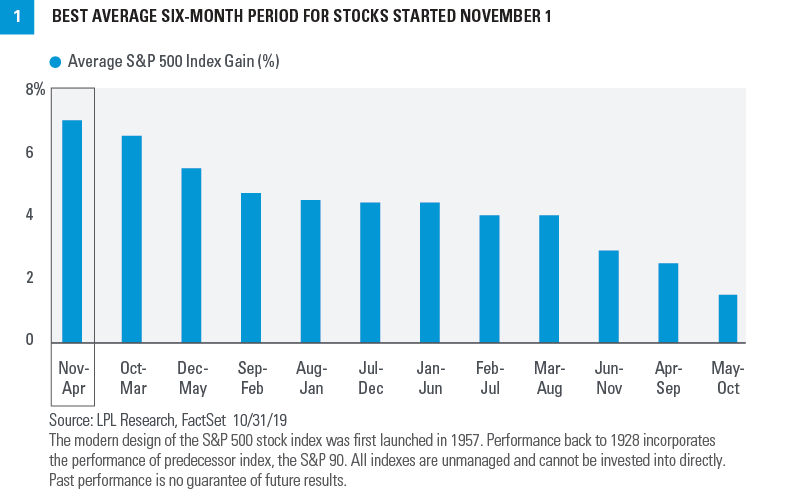 The six-month period from May through October historically has been the worst time of year to own stocks, while the six months between November and April historically have been the best.