Earnings season has started, although we expect only a marginal increase over last year’s fourth quarter. For us, the focus is on what we can expect in 2020. We also look at historical S&P 500 Index performance in presidential election years.

Q4 earnings season is upon us, and the LPL strategists discuss why it’s all about 2020. Earnings always matter, but as fourth-quarter earnings are expected to be slightly lower, we are most interested in what corporate America has to say about future earnings. Earnings are expected to grow 5-7% this year, which is right in line with the long-term average. Given 2019 earnings most likely will be flat, we’re expecting to see improvement in 2020.

We had some big positives on the economic front last week. For starters, the United States and China finally agreed on phase one of a trade agreement. As the LPL strategists discuss, there are many opinions about whom the deal will benefit, but the bottom line is this deal removes one major stance of uncertainty. The fact things have calmed down between the two international powers could be what’s needed to allow business investment to pick up.

Additionally, retail sales in December came in quite strong, further suggesting the consumer remains the shining star of the U.S. economy.

There are increasing concerns about what the upcoming U.S. election could mean for stocks. Here’s the good news: Since 1940, the S&P 500 Index hasn’t been lower during an election year when the incumbent president was up for reelection. In the years the incumbent president was a lame duck, however, we have seen some large declines. For instance, the 2000 and 2008 election years both had lame duck presidents, and stocks were lower those years. 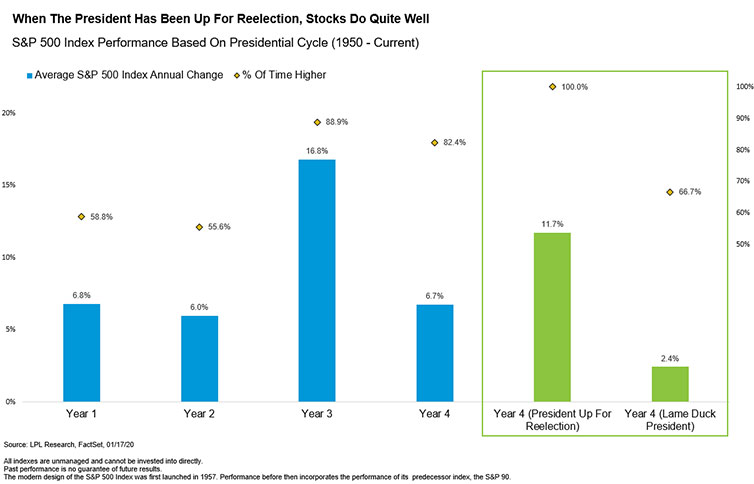