Last week was a busy week, with multiple headlines moving equity markets. All the while, the more defensive areas continued to gain on the more aggressive areas.

From impeachments to more fighting with China over trade, trouble in the repo market, and disappointing economic data, last week was a news-heavy week. What caught our attention, though, is that under the surface, value once again outperformed growth. Somewhat surprising was the fact that financials (the largest component of value) bucked the trend and outperformed. Consumer confidence, core capital goods, and weak European manufacturing data all pointed to slowing growth.

A repo (short-term repurchasing) agreement is treated as a short-term cash loan in which a holder of a U.S. Treasury security sells the security for cash for a short period of time. Corporations and financial firms typically tap this market for short-term financing needs, as well as a way to pick up yield on cash. Well, last week saw a huge spike in repo interest rates due to a shortage of cash available to lend. To help out, the Federal Reserve (Fed) injected liquidity to stabilize rates.

Is this the first domino to fall? Our strategists think it was more of a perfect storm of cash availability. The September 15 corporate tax deadline required businesses to pull a large amount of cash from the repo market. That coincided with a large settlement of U.S. debt, which many banks are obligated to step in and buy as primary dealers. Suddenly, many businesses were looking for a cash infusion, but firms that typically provide repo loans didn’t have enough cash on hand to satisfy the market’s needs. Basically, there was a large imbalance of supply and demand, and the Fed had to restore balance in the system by purchasing Treasuries and other securities from firms in exchange for cash.

The House moves toward impeachment

Speaker of the House Nancy Pelosi announced last week that she would support an impeachment inquiry into President Donald Trump. Only one president over the past 150 years has been impeached, and that was President Bill Clinton in 1998. What is interesting is stocks did quite well in the late 1990s, as the tech boom continued. Meanwhile, stocks were nearly cut in half during the horrific bear market of 1973–74, which was taking place during the Nixon impeachment discussions. (President Richard Nixon resigned before the impeachment vote.) At the end of the day, we think stocks can handle the impeachment talk as long as the economy remains firm.

A look at the globe

The strategists also discussed that the U.S. economy continues to perform well when compared to the rest of the developed world, and it is still exhibiting growth near its long-term trend. The outlook in other developed economies is not quite as bright, however, as unconventional and aggressive policy decisions from global central banks are becoming increasingly ineffective. For more on global markets, please see this week’s Weekly Market Commentary: Global Market Muddles Along.

October is known as a scary month for stocks, mainly due to huge crashes in 1929, 1987, and 2008. The good news is October usually does pretty well—all things considered. It is a volatile month, however, and after a historically calm month of September, we expect October to be much more volatile. With all the various headlines still out there, we suggest you get ready for some potential fireworks. 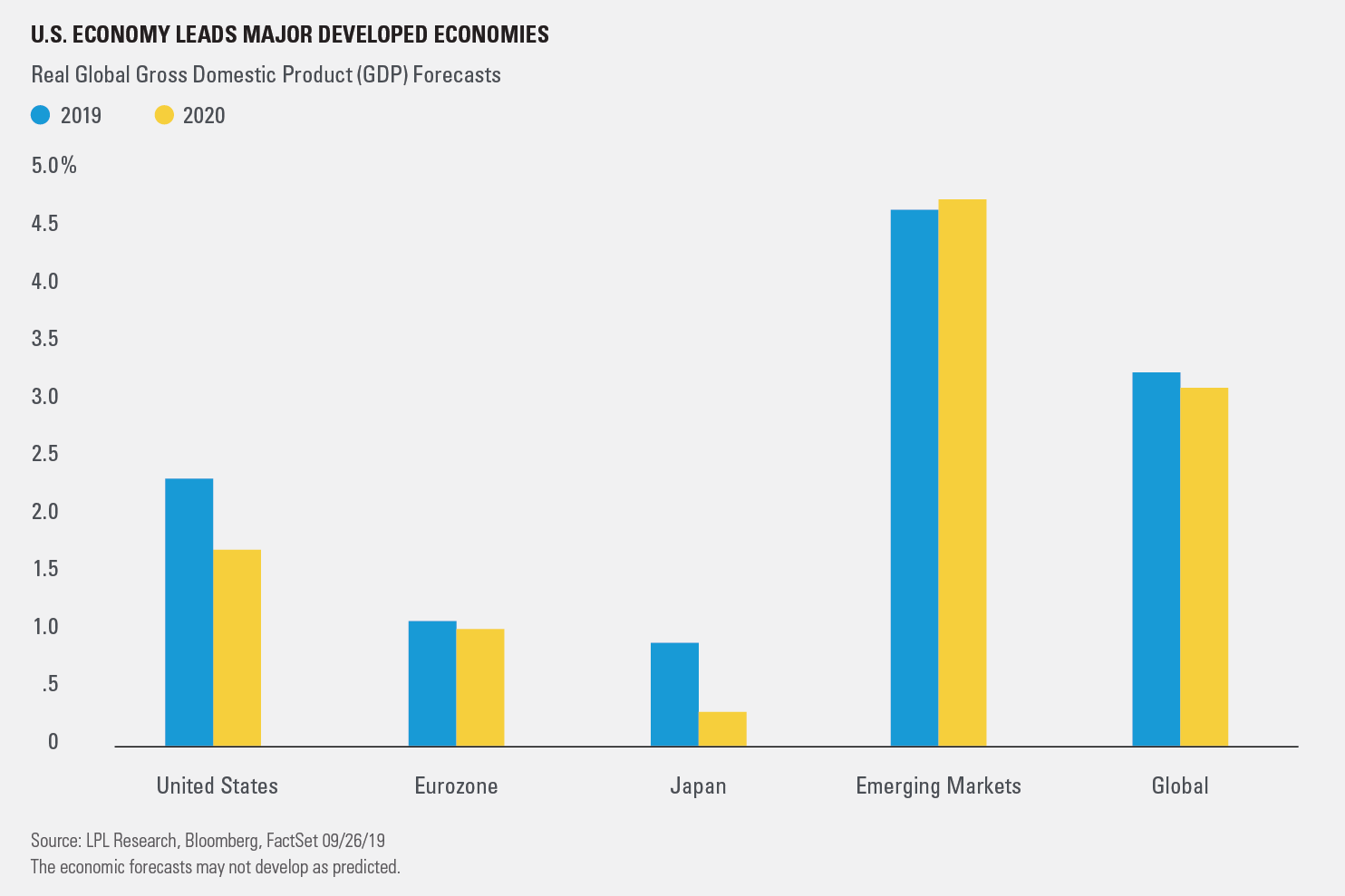 Globally we see slightly weaker gross domestic product (GDP) taking place in 2020 in various developed markets, yet it is interesting to note that emerging markets are expected to see an uptick in GDP next year. If there truly was a global recession next year, it would be hard to think it could happen with emerging markets GDP up near 5%.