Some good news on trade

Friday, October 11, the U.S. announced it had reached a verbal agreement with China, concluding two days of face-to-face talks and rampant speculation of a deal in financial markets. China agreed to purchase more agricultural products from the United States, and the United States dropped plans for higher tariffs on $250 billion in Chinese goods, which had been scheduled to take effect Oct.15. However, we’re still a long ways away from a total agreement, and tariffs are still scheduled for December. As the LPL strategists note in the podcast, there still could be a Phase 2 and Phase 3 in the talks down the road, but this was a nice step in the right direction.

Corporate America is unlikely to deliver much, if any, earnings growth in the third quarter. However, we think better days lie ahead, and we note that earnings could hit double-digit growth in 2020. We also expect progress on trade to keep U.S. economic growth at or above the trend for the current economic expansion. Although earnings growth could lag, we believe consensus S&P 500 Index revenue growth estimates just below 3% for the quarter are achievable in this economic environment (Source: FactSet). Historically, revenue growth has been closely correlated to gross domestic product (GDP) growth, and GDP has grown at a respectable 4% pace (including inflation) over the past year.

Weak services and manufacturing data have many on guard regarding the U.S. economy, yet there are some good signs under the surface. For starters the 2-year/10-year yield curve is the steepest it has been in two months, and the shorter end of the curve is back above 0%. Additionally, recent consumer data continues to show a quite healthy U.S. consumer, which is important given consumer spending makes up nearly 70% of GDP.

Send us your questions 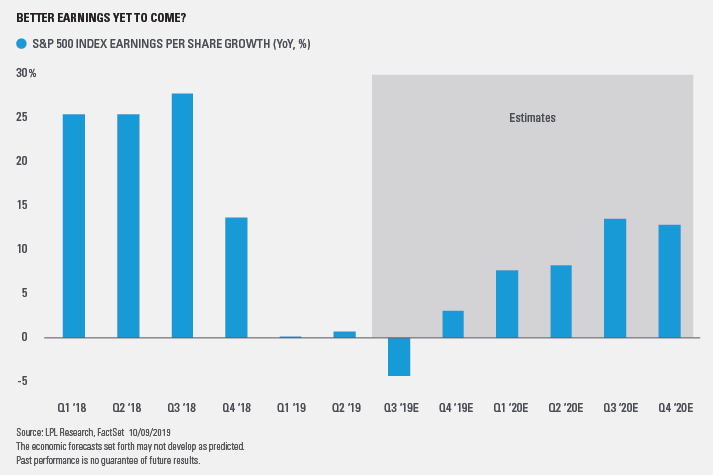 Third quarter earnings are expected to be down year over year, but we believe things should pick up nicely in 2020.