A Tale of Two Economies

Consumer spending has powered the U.S. economy this year as businesses curb investments. We expect growth to slow next year, but a strong U.S. labor market and solid consumer spending will likely fend off a recessionary environment.

We think the consumer will continue to anchor this record 10-year expansion, empowered primarily by a tight labor market and moderate wage gains.

Consumer spending has powered the U.S. economy this year as businesses curb investments, waiting for trade and geopolitical uncertainty to fade. We expect that growth will likely slow next year as companies continue to sit out this part of the cycle; however, we expect a strong U.S. labor market and solid consumer spending to fend off a recessionary environment.

It’s been a tale of two economies in 2019. U.S. consumers are spending at a solid rate, which we expect to continue through the important holiday shopping season that is rapidly approaching. U.S. businesses, on the other hand, are not opening up their wallets, and capital expenditures (capex) growth has stalled. Consumer sentiment has remained elevated through most of this year, while gauges of business and chief-executive-officer confidence have declined to three-year lows.

The disparity has been especially pronounced in recent gross domestic product (GDP) data. Consumer spending has largely propelled GDP over the past two quarters, while business spending has dragged on growth [Figure 1]. We expect these trends to continue as trade and geopolitical headwinds simmer into next year, leading to our preliminary 2020 U.S. GDP forecast of 1.75%. Progress on trade offers upside potential. 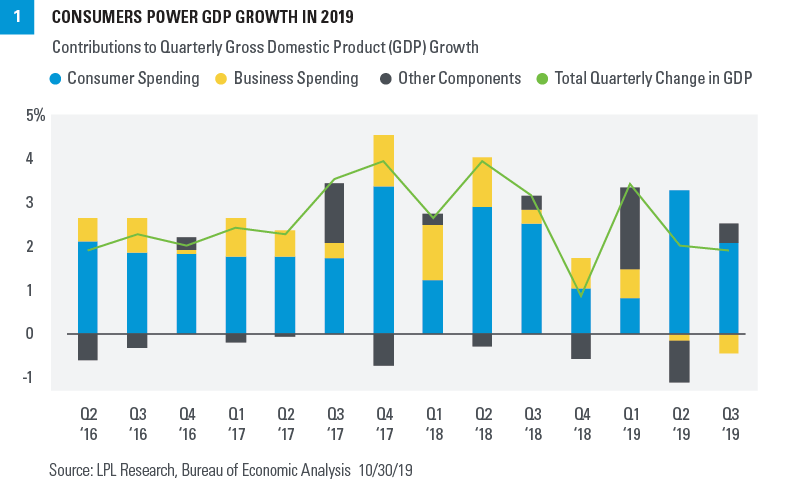 U.S. consumer activity has been largely immune from global headwinds, even as other parts of the economy have succumbed to uncertainty. To be fair, consumers have several reasons to be optimistic. Employment is the primary driver of consumer health, and the U.S. labor market has been resilient. Nonfarm payrolls have grown at a 12-month average pace of 175,000, in line with average payroll growth for this cycle. Wage growth has consistently been around 3% year over year, the fastest pace of the expansion. Claims for unemployment benefits have hovered near cycle lows for months.

More potential workers are also entering the workforce, evidenced by the labor force participation rate’s recent ascent to a six-year high. That’s an especially encouraging development, as we typically have seen workforce participation rise when consumers have had a positive view of economic and labor market conditions. If consumers feel good about the economic outlook—and are finding employment—they may be more likely to spend money.

Of course, there are risks to the consumer outlook. Signs have emerged that U.S. consumers are becoming more nervous, and there’s always a chance that U.S. companies could pare back hiring if headwinds significantly weigh on profit margins. Still, we think the consumer will continue to anchor this record 10-year expansion, empowered primarily by a tight labor market and moderate wage gains.

BUSINESSES GO ON THE DEFENSIVE

Corporate pessimism has been a thorn in the side of the U.S. economy this year. U.S. businesses have backed off from increasing investment spending in the face of elevated uncertainty, ignoring enticing fiscal incentives for business spending and lower tax rates. Nonresidential investment has dropped for the past two quarters for the first time since early 2016.

While operating conditions aren’t ideal for U.S. businesses, they’re still manageable. Domestic demand is adequate, and businesses’ costs remain contained. S&P 500 Index profit growth has stalled but not fallen apart. However, businesses have switched to a more defensive stance as they’ve waited for more clarity on trade concerns and geopolitical issues. We understand why companies are holding back, but we believe the hesitation to spend could materially weigh on future output.

Higher capex usually has led to higher productivity (output per worker). Growth in productivity could provide a timely boost to the economy as the expansion ages, while also capping employer costs and boosting profit margins. Productivity growth picked up through the second quarter of 2019 amid last year’s business spending, but recent data shows this trend is fading. Nonfarm productivity unexpectedly slid 0.3% in the third quarter, its first quarterly decline since the fourth quarter of 2015. Sustained moderate productivity growth has been a key part of our economic outlook, but we have yet to see this trend materialize because of muted capex growth.

There are a few tailwinds forming for business spending, though. We’ve seen a gradually improving relationship between the United States and China since early October, as both parties are reportedly interested in signing a limited trade deal to avoid future tariffs. Recent data shows global manufacturing may be bottoming, a key sign of recovery for the global economy.

The timing of these tailwinds could be especially influential. Many companies are in the planning stages for next year’s investments as fiscal years wrap up. Progress on the trade front could motivate some businesses to resume expansion plans, although it’s tough to see meaningful growth in capex without further progress on trade. Some trade uncertainty has dissolved, but U.S. businesses may not fully revive spending plans until the policy outlook is more stable.

We think strong consumer spending will continue to power the economy as it waits for resolution of trade uncertainty and geopolitical issues.