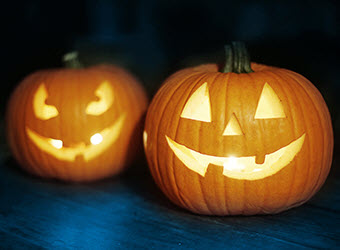 The stock market has been hovering near record highs despite an assortment of economic and geopolitical risks. Risks that might spook the markets include trade tensions, bond markets, U.S. manufacturing, Fed policy, and geopolitical concerns.

Even amid trade uncertainty, we see continued growth for the U.S. economy in 2020 and beyond. However, the U.S. manufacturing sector recently has begun to contract.

The stock market has been hovering near record highs despite an assortment of economic and geopolitical risks. In the spirit of Halloween, we discuss some of the tricks and treats that might spook the markets between now and year-end. Trade remains the biggest worry, followed by bond markets, U.S. manufacturing activity, fear of a Fed policy misstep, and global geopolitical concerns.

The U.S.-China trade conflict remains a wild card for U.S. and global economies, and it headlines our list of concerns. The United States and China have reportedly reached a verbal “truce,” and by all indications a phase-one agreement may be signed at the Asia-Pacific Economic Cooperation (APEC) meeting November 16–17. China’s reported willingness to accept some level of ongoing U.S. tariffs and to discuss issues previously thought to be off the table, such as intellectual property protections, is encouraging.

At the same time, we acknowledge the potential for further escalation. Both parties want to portray strength, and they could choose to inflict more economic pain on each other to position for a better deal. China’s leadership also appears unwilling to make significant structural changes to its economy. China could wait out President Trump and take a chance on possibly negotiating with another administration after the 2020 U.S. presidential election, while China’s President Xi does not have to face re-election. The controversy in Hong Kong is adding more uncertainty on top of an already complicated situation.

Even if a phase-one agreement is signed in November, we may have a long wait for phase two, and we expect the U.S.-China trade dispute will continue well into 2020.

The U.S. Treasury yield curve inverted (long-term yields falling below short-term yields) recently, thanks to a wave of intense global buying in U.S. debt. Many investors pointed to the inversion as a sign of imminent recession, but we don’t totally agree. While we‘re not dismissing this early signal, we believe yields have reflected the need for looser monetary policy rather than economic woes.

Thankfully, two Federal Reserve (Fed) rate cuts and progress on trade negotiations have helped the yield curve climb out of inverted territory [Figure 1]. We also are encouraged by the relative health of the credit markets, based on yield spreads for corporate bonds compared to U.S. Treasuries. However, if trade tensions flare up again or global economic growth slows further, this signal from the bond market could spark renewed recession fears.

After scaring markets with over-tightening and miscommunication in December 2018, the Fed has guided investors through its policy changes more effectively in 2019.

The risk of a policy misstep still lingers, though, and there’s a mismatch between the Fed’s and the markets’ expectations. Policymakers are expecting the fed funds rate to stay at (or just below) its current level through the end of 2020, while fed fund futures—essentially what the bond market thinks—are pricing in a 75% chance of at least two rate cuts over that same period. Investors positioning for a series of rate cuts may get spooked if Fed policymakers stick to their projections. On the other hand, if the Fed attempts to steer rate expectations higher by citing the resilience of the U.S. economy, we could experience additional market volatility.

We expect the Fed to make one more rate cut of 25 basis points (.25%) this year, and we don’t think the Fed will take its policy rate below 1.5%, even in 2020. At that point we would expect policymakers to smoothly guide investors through an eventual pause in rate changes.

Even amid trade uncertainty, we see continued growth for the U.S. economy in 2020 and beyond. However, based on the survey from the Institute for Supply Management (ISM), the U.S. manufacturing sector recently has begun to contract, sparking recession fears. From our viewpoint, tariffs and trade uncertainty have been a big part of manufacturing weakness.

We are encouraged by several things, however. Historically recessions have not occurred until an average of about four years after the manufacturing ISM has peaked, and the cycle-high ISM reading so far was a little more than a year ago in August 2018. Second, recessions historically have been accompanied by ISM readings in the low 40s, and the most recent reading was 47.8, which gives us some cushion. Mid-expansion dips below 50 are common, with the most recent ones occurring in late 1995, 2012, and late 2015. The October manufacturing ISM report, due out November 1, is expected to rise to a less scary 49, based on Bloomberg consensus forecasts.

Geopolitical risk, or risk based on geographic regions and politics, may be the scariest for many investors, but it’s also likely to have the least amount of market impact. Geopolitical hot spots include the United Kingdom’s “Brexit” from the European Union and the related rise of populism in Europe, Hong Kong protests, Iran’s conflict with Saudi Arabia, Iran’s and North Korea’s nuclear ambitions, and Japan-South Korea tensions. Investors may be tempted to sell stocks based solely on these headlines, but we do not believe these risks will impair U.S. or global economic growth meaningfully.

In our opinion, policy changes related to the 2020 U.S. presidential election may have more of an economic and market impact than geopolitical risks. It’s probably too early for markets to be leery of post-election policy changes, but we’ll take a closer look at the possibilities next year and in our new Outlook 2020, available the first week of December.