The U.S.-China trade impasse, Brexit, and Fed policy have been the biggest uncertainties in the equity markets this year. Now that these seem to have cleared, what do LPL Research strategists expect for equity markets in 2020?

LPL strategists cover three of the biggest uncertainties of 2019:  the U.S.-China trade disagreement, the United Kingdom’s exit from the European Union (Brexit), and questions about what the Federal Reserve (Fed) will do next. Without these strong headwinds, equity markets may be poised for more gains in 2020.

The United States and China have finally agreed on a phase-one trade deal. As the LPL strategists discuss, the United States cancelled the plan to add 15% tariffs on an additional $156 billion of Chinese goods, but it will leave $25 billion in tariffs on the existing $250 billion of China’s products to make sure China sticks with its commitment to buy up to $50 billion worth of U.S. agriculture per year over the next two years. This agreement is a major step in the right direction for trade, but now we move to phase two of the trade deal with China, which could be much more difficult.

Emerging markets gained last week; this is one group the strategists continue to like as we head into 2020.

More good news came from the United Kingdom (U.K.) after the British public gave Prime Minister Boris Johnson and his Conservative party a clear victory and control of Parliament. As the LPL strategists discussed, this opens the door for the U.K. to finally leave the European Union (E.U.) and complete “Brexit.” As a result, many European stock markets soared late last week, with the STOXX Europe 600 breaking out to new 20-year highs.

The British pound also rose on the news, as the chances of a “hard Brexit,” or leaving the E.U. without a deal in place, tanked.

The Federal Reserve (Fed) announced at its December meeting that it would leave rates unchanged, concluding a string of three 25 basis point (0.25%) rate cuts from July to October. As the LPL strategists discussed, investors expected the Fed would leave rates unchanged after Fed Chair Jerome Powell clearly messaged the end of rate cuts at the previous meeting. What was more interesting, though, was policymakers’ rate projections, illustrated on the updated “dot plot.” Policymakers now expect the fed funds rate to stay unchanged through the end of 2020, before moving higher over the next two years. The updated dot plots appear to confirm that the recent string of rate cuts was indeed a mid-cycle adjustment. 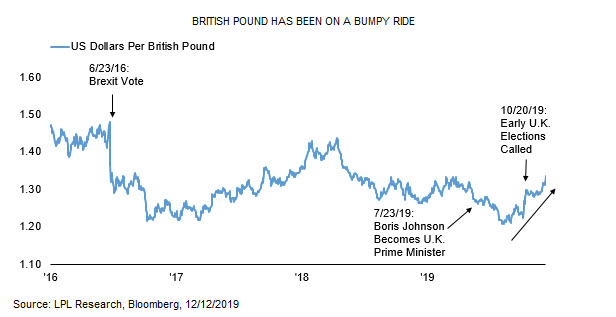