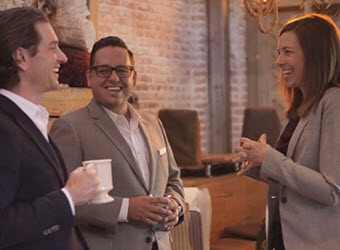 Around the Table Episode 8: Come Up and Say Hi

Inclusion. Sometimes the easiest way to promote it and practice it is to simply say hello to someone.

At one time or another, we’ve all seen it. Many of us have experienced it. Someone, possibly you, is sitting or standing alone at a conference or business mixer. It’s awkward and uncomfortable. It also happens too frequently.

Humans need to belong, yet they commonly leave others out. For those excluded, especially if they feel it’s because they’re different in some way, the ostracism can be painful.

What a difference it makes when someone says “hi” and engages in small talk. In this episode of Around the Table, LPL leaders and advisors discuss the importance of consciously reaching out to someone who might be on the periphery.

It helps financial advisors develop empathy. It ultimately helps them forge deeper connections with their clients. Plus, it’s the right thing to do.

Watch the complete episode for more insights on diversity and inclusion from people experiencing it on the frontlines of the financial planning business.

You can also learn more about what we’re doing at LPL to create a more diverse, inclusive culture for our advisors and employees.

Marci: But I'm not sure if you guys follow different podcasts, but Rianka and the 2050 Trailblazers, so she mentioned that when she goes to conferences there's been some conferences she's gone to and there's not been one person that's come up and talked to her. Like how sad is that, that she could go through a whole three-day conference and nobody's addressed her. That would not be me. I would go up and talk to people. To me I kind of sense the people that feel they're a little bit uncomfortable, and so whether it's a happy hour or a mixer or any kind of business social setting like that. But for her to say that she goes to conference after conference and... so the other person on the podcast was saying, "So what should we do?" Like just come up and say, "Hi." You know and just comment on you know whatever. What brought you here or I like your shirt.

Bobbi: Well you bring up a great point because that speaks to inclusion.

Marci: Because why would you go back if you don't feel...

Bobbi: Well we would talk to our kids you know, on the playground if you see kids alone go up and say hello. It's the same thing in a business setting. We have a responsibility to do that.

Lauren: It does have to be intentional, because I think we all naturally tend to migrate toward people who are like us or who we think are like us.

Bobbi: Who we know.

Lauren: And we know. Exactly. Who we're familiar with, but we do have to be more conscious about making that extra effort to go and bring in someone who might be on the periphery.

Ye: I mean I still recall my very first focus experience in Boston. And that was 11 years ago. Walking on the expo floor, didn't see a whole lot of Asian faces there really. I mean I felt like, that sense of belonging? No. There's none of that.

Kathleen: So what's the challenge of that- I'm sorry Wes. Did you...

Wes: No, sorry. I was just going to say in an industry that's so predominantly or traditionally dominated by white males is the typical stereotype of a financial advisor, this has to be a proactive initiative. It can't simply be reactive. It's too late sometimes.

Lee: And then one thing I was going to follow up with something you said earlier, Marcia. We talk about conferences, and I have this thing. And it's just a little personal thing is if I go to a lunch or a dinner and there's an empty table, I go to the empty table because I'm curious to see who will come to sit at the table.

Marci: If anybody will come sit. How often do people come? What's your ratio?

Lee: It varies. There'll be you know, it varies. But it's just interesting. It's kind of like well who will I draw today?