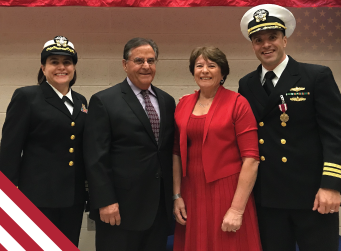 When LPL advisor Russ Cesari’s daughter and son went into the military, the former Army captain offered these words of advice: “You need to take care of your people. If they know you care about them, they’ll be loyal.”

That same sentiment carries over to his career now as a financial advisor. Cesari is a wealth advisor with Northwest Financial Advisors in Herndon, Va., and ranked among the top one percent of all LPL advisors.

Cesari spent four years in the military, including a tour of duty in Vietnam, and had a long career with IBM before he ventured into the financial planning business in 1997, joining LPL in 2001.

“I wanted to help people have a better life,” Cesari said. “People often don’t understand financial planning. I realized I can educate them and make a difference in their lives by providing advice and counseling them.”

Cesari believes his military experience influenced his ability to serve his clients today. “Veterans in our business have a little deeper understanding of service and advocacy and helping people,” he said. “All of the time spent overseas really gives you a little different value system.”

LPL Sr. Business Consultant Gray Davis agreed. Davis served in the Army for 5 years and deployed in support of Operation Iraqi Freedom. “The underlying discipline and selfless service to country and fellow citizens correlate to how LPL and our advisors are committed to serving American investors.”

The impact on his work is evident. Karen Benedict, a senior vice president with Northwest Financial Advisors, said, “Russ is driven like no other person I have ever known.” She added that he demonstrates an impressive commitment to his clients.

Cesari jokes that his job is part financial advisor, part pastor, part parent and part marriage counselor. “It amazes me the details he knows about so many of his clients,” Benedict said.

Cesari is part of the President’s Circle at the Naval Academy, where two of his children graduated.  He spends much of his free time volunteering at the academy, noting the importance – once again –of service.

“The United States is the land of opportunity,” Russ says. “And our military supports our way of life.”

Cesari recently celebrated his 50th anniversary with his wife, Joann. When not volunteering or spending time with his four grandchildren, Russ can be found on the racquetball court training for the Senior Olympics. He’s a four time Maryland champion who has his sights set on nationals in June 2019.