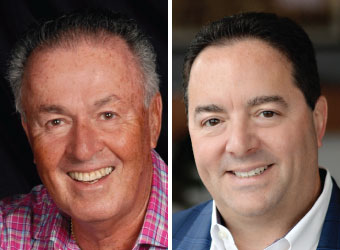 For 50 Years, Freedman Financial Has Provided ‘Financial Advice in a Language You Can Understand™’

Tucked away in historic Peabody, Mass., nestled along the gateway to Salem, just north of Boston, is Freedman Financial, a family-run practice that started 50 years ago in the basement of Barry Freedman’s home. He built the business going door-to-door, determined to make a difference in the lives of his clients by listening deeply, crafting thoughtful strategies, and then guiding investors throughout their financial journey.

Five decades later, including 32 years affiliated with LPL, Freedman Financial continues to thrive under the leadership of Barry’s son, Marc Freedman. As thousands of financial advisors gather in Boston next week for Focus, LPL Financial’s annual signature conference, here’s the journey of how a pioneer in the industry built his business and how the next generation has taken it to a far greater level.

In the 1960s, when many practices focused heavily on selecting and managing investments, Barry joined a growing group of advisors interested in financial planning. “We believed it was the best way to make the most impact on clients’ lives. We would do at least a cursory inventory of finances before offering any suitable solution,” Barry Freedman said. He was one of the first 100 CERTIFIED FINANCIAL PLANNER™ practitioners in America, and he became an advocate and leader on a national level, at one point serving as chairman of the Foundation for Financial Planning.

Marc Freedman had not been planning to follow in his father’s footsteps after he graduated.  He majored in marketing at Babson College and began his career selling Chinese food takeout containers during the day and hosting karaoke shows each night at Boston’s Faneuil Hall. In 1991, at age 24, Marc Freedman became engaged to his wife, Laura, and started contemplating his future. He asked his father to lunch, wanting to learn more about the financial planning industry.

“Dad said to me, ‘No day will ever be the same and every day you will make an impact in someone’s life,’” Marc Freedman said. “I thought, ‘well that’s definitely better than selling Chinese food takeout containers.’”

The patriarch encouraged his son to pass his Series 7 exam and come work with him. Before accepting clients of his own, the younger Freedman spent three years in the Certified Financial Planning program while shadowing his dad. “I watched everything. I never spoke in meetings. I did all the paperwork, all to gain an understanding of how everything works.”

With Marc Freedman on board, business continued to thrive. Freedman Financial served more than 800 clients by 2002, at which time they hired a business coach to focus their target market –mass affluent baby boomers, typically couples who have been married more than 20 years, who have lived in the same home for 20 years and in peak earning years, and brought in a collective income of $100,000-$200,000 per year, Marc Freedman said. They trimmed their client list to about 450 households.

With LPL’s help, the Freedmans transitioned their firm from one that was solely commission-based to now nearly all fee-based, with a commitment to financial planning for every client. “We always do financial planning first before we take a single dollar from our client. That continues to be our trademark today,” Marc Freedman said.

In 2007, Barry Freedman retired, executing on a succession plan that was 10 years in the making. “We put all our clients under joint Rep IDs, and over 10 years, he gifted me 50 percent of the business,” Marc Freedman said. “After an independent evaluation of the firm, I bought the other half of his business so he could retire.”

Today, Freedman Financial is among LPL’s top practices and its reputation in the community has soared. LPL’s Rebecca Power, vice president in Business Consulting, has worked with many firms over the years and says “only a few come to offering close to what Freedman Financial does for their clients. It’s the personal relationships that set this firm apart. They care for multi-generations of families, volunteer in their community, and are an advocate within the industry. They’re true professionals and a complete delight to work with.”

It’s been 28 years since Marc Freedman joined his dad in business, and his first clients are still with him. He and his business partner Marion Gilman focus on high-touch, high-value relationships. Marc makes a point of connecting with clients at least 72 times a year through meetings, social events and a weekly newsletter, not counting phone calls or emails. He is also the featured financial advisor on a Boston-area radio station program, “Dollars and Sense.”

Barry Freedman recently reflected on what he believes has been the key to their firm’s success: “Having core values that our clients and prospects know that we stick with.” The younger Freedman agreed, adding, “We provide financial advice in a language you can understand. People don’t care about investment strategies. They just want to know that, at the end of the day, are they OK to retire?”

Freedman Financial is a registered investment advisor and separate entity from LPL Financial.