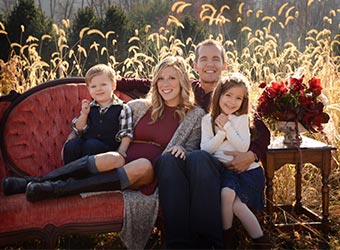 Conor Delaney’s parents were school teachers who lived paycheck to paycheck. Despite their knowledge and success in academia, they were unaware of the importance of investing or retirement planning, and they struggled just to pay the monthly bills, filing bankruptcy twice. Then, just days after Conor graduated from high school in 2003, Conor’s father died suddenly at age 52.

“When I lost him, it put everything into perspective. It threw me right into adulthood, taking care of my mom and family as well as having to start college only weeks later,” Conor said, now a father of three children under the age of 5 with his wife Elizabeth. “My mother was wrestling with health and financial issues so we had to figure out a way to make money and make good financial decisions.”

Conor went to an advisor, only to learn there was “not enough” money left after paying expenses. “I had never even written a check prior to that day,” Conor said.

It wasn’t long before Conor went into the retirement planning business. He began working toward his securities license as a freshman in college, practicing as an advisor by day and being a full time student-athlete by night. A decade later, Conor co-founded Good Life Financial Advisors, becoming one of the youngest to act as a Office of Supervisory Jurisdictions in the history of LPL. Headquartered outside of Philadelphia, Good Life has grown from two reps and $25 million in client assets to a full-service hybrid with more than 60 advisors in 27 states.

Good Life provides infrastructure, technology, training, investment advice and other support to independent financial advisors across the nation. He leverages his partnership with LPL to recruit new advisors and provide the resources and tools to manage business operations, allowing him to focus on the three Ps: people, process, and products. In 2016, Good Life Advisors was named a Best and Brightest Company to Work For in the Nation. Later this month, Delaney will be honored as one of the top entrepreneurs in the greater Philadelphia area.

Making something out of nothing

April is National Financial Literacy Awareness Month, a federally-recognized initiative that promotes healthy financial habits. Like Conor’s parents, many Americans don’t save because there’s little money left once bills are paid. But if you make a commitment and plan, every little bit adds up, Conor said.

“After my dad died, I took whatever I could spare to make something out of nothing. This wasn’t just monetarily, but it meant also taking a very bad situation and using it to change lives for the better.” Conor said, adding he specifically focused his initial practice to help school teachers with retirement planning.

Conor grew his business organically, developing clients through the relationships he had through coaching high school basketball and volunteering with the YMCA. “I wanted people to see me as Conor the person, not Conor the financial planner. If you do the right things for people and if you work hard, you gain trust and respect. It’s all about the total value of the relationship.”

“Conor’s passion about his family and professional business is second to none. I have had the pleasure to work with Conor, his partner Courtnie and the Good Life team for just over three years and have personally learned as much from them as I have given in return,” said Jason Gallagher, LPL vice president, Business Consulting. “Seeing how Conor has implemented financial literacy for both his family and his business is inspiring.”

The Best and Brightest Companies to Work For® competition identifies and honors organizations that display a commitment to excellence in their human resource practices and employee enrichment. Organizations are assessed based on categories such as communication, work-life balance, employee education, diversity, recognition, retention and more.

Best and Brightest is not affiliated with LPL Financial.