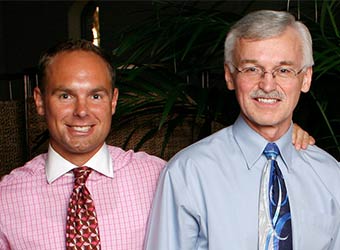 Longtime Advisor Prepares to Transition ‘Ministry in Finance’ to Son

When Joel Malakoff was 11 years old, his father sat him down to break some devastating news: there would be no more allowance. The family could no longer afford the extra $2.50 per week.

“That was big,” Joel said. “It let us know we’re in a tough financial spot. It was a huge, pivotal moment in my life.”

At the time, his dad Erny Malakoff was in between careers. Erny would eventually move on to become president of Malakoff & Associates Investment Services, a Castro Valley, Calif.-based firm that Joel will take ownership of later this year.  The family practice also includes Erny’s wife Kathleen, a registered sales assistant and tax professional.

But it was quite a journey getting to this point.

Neither father nor son set out to become financial advisors. Erny studied Classical Greek in college and received a Masters of Divinity before going into church ministry. He left his role as a senior pastor in 1986 to go into financial planning. “I never stopped serving. Now, it’s a ministry in finance –listening, guiding and helping by utilizing the same principals I held onto for all those years,” Erny said.

Likewise, Joel initially studied clinical psychology and then went into seminary in hopes of working in international communities along with church planners. Unfortunately, “doors were slamming shut,” Joel said, so he agreed to help his family business during tax season. Joel struggled at first. “It wasn’t all roses,” Joel said. “In 2008, Dad gave me an honest talk and told me I needed to step it up.”

Once Erny gave him the freedom and independence to develop his own niche and client base, the younger Malakoff began to thrive as a financial advisor. He focuses on serving a core list of clients with a higher level of investable assets. The model enables him to be able to focus deeply on supporting their goals, helping to ensure their financial legacy and providing knowledge and experience to manage the more complex financial issues that affect the $1 million and up client segment.  The firm also has an associate who works with investors with a lower minimum portfolio.

The two have a unique working relationship in that their practice is faith-based and character-driven. “If we have to take a loss in order to live out our values then we will,” Joel said.

Succession plan in place
LPL Business Consultant Eric Ripley has worked closely with the Malakoffs on the succession plan and Erny’s exit strategy. He was able to align them with the resources, including LPL’s Advisor Financial Solutions, to guide the Malakoffs through the planning and execution of moving the practice to Joel.  That included consulting services around deal structuring, valuation, financing and transition support. “It’s always gratifying to me as a consultant to uncover a challenge and watch our combined home office efforts come together to address our clients goals,” Eric said.

In most cases, an advisor’s practice is the most valuable asset he or she owns, Eric said. Yet, some advisors don’t have a succession plan. Without one, it’s challenging to ensure the intended beneficiary of the business can inherit the practice.

“I have an extreme sense of satisfaction and confidence in Joel’s ability,” said Erny, who is looking forward to more time to travel, work out and ski. “Joel is a person of integrity who shares my core values and commitment to a Christ-centered practice.”

Eight years after the allowance talk, as he was dropping Joel off at his University of Massachusetts dorm room, Erny told his son, “Joel, I can no longer deny you anything because I cannot afford it. Instead, I need you to think through your spending and be a steward of our resources.”

“This is actually the driving force for me as a son/ successor, business owner, and advisor,” Joel said. “I want to help people be the best steward of their resources.”