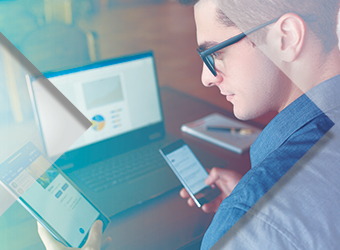 Is your Twitter marketing strategy coming up short? Make the most of this platform by avoiding mistakes many financial advisors make.

Twitter presents a valuable opportunity to connect with clients and introduce yourself to prospects and influencers. However, many financial advisors aren’t maximizing its full potential.

Here are some common Twitter mistakes and how you can correct them to drive better results.

Mistake #1: Set It and Forget It

Without enough information on how Twitter works, or enough time set aside to actively participate, some financial advisors turn to automated solutions to post articles on their behalf.

These types of services help keep you active, but they’re not a social media strategy unto themselves.

Think of Twitter as a room full of the most influential people you’d want to meet—community leaders, journalists, politicians, business executives, etc. Joining Twitter is like walking into that room. How would you best take advantage of that opportunity?

The goal is to stand out from the crowd and make a name for yourself. It’s the same with Twitter. Active, authentic participation is key to generating new and important relationships.

Yes, Twitter is a powerful tool to get your voice out there. But one of its most powerful assets is its ability to generate conversation.

In addition to posting your own thoughts, read what others are saying and respond to them. Retweet, comment, or like their posts to show interest and engagement.

This back-and-forth interaction creates a conversation on a public platform to shed light on who you are and what your personal brand is all about, with the potential to reach new audiences.

Twitter Marketing Tip: Follow local journalists who write about financial topics. Engage with their posts by liking, replying, or retweeting with your own thoughts.

Many journalists pay close attention to Twitter and will note this interaction, get to know you as a local financial thought leader, and potentially reach out to you if they need a quote for their next article.

Some financial advisors have had success with this Twitter marketing tip, essentially establishing their own grassroots public relations strategy.

Mistake #3: Not Taking Advantage of Hashtags, Mentions, and Follows to Reach Targeted Audiences

Excluding your followers, most Twitter users will not see your posts unless you get their attention through hashtags, mentions, and follows.

Hashtags start with the “#” sign and function to group your post with other tweets on the same topic, making it more discoverable. An example of a hashtag would be #financialplanning. Note that there are no spaces between the “#” sign and the word, or between the words themselves.

Be sure to include at least one hashtag in all your posts, and (in my opinion) no more than three. Too many hashtags can visually distract from your main message.

Mentioning another Twitter handle, such as @TheSarahLeBlanc or @LPL, in your content sends that person or organization a notification, which raises their awareness of you and your expertise and might lead to them following you.

And speaking of generating followers, make sure you follow anyone and everyone you’d want to be following you, including clients, prospects, journalists, LPL leadership, etc.

Following them also sends a notification and could lead to a follow back, thus growing your audience.

Learn more ways to use marketing to grow your business.

Already growing with LPL? Access your financial advisor marketing tools and trainings in the Resource Center.

You should consult your compliance department for information about the rules and use of social media.