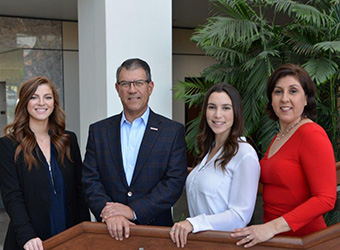 “The technology and resources are of tremendous value to me and my staff, but it’s the transformation of the company culture that is the driving force behind me coming back.”

Advisor Returns to LPL for a Better Cultural Fit

E. Martin von Känel, CFP, founder, managing director, and sole principal of Patriot Wealth Management believes in achieving goals through steady and measured discipline. That philosophy has certainly helped get von Känel where he is today. With over 30 years as a financial planner and portfolio manager, von Känel speaks Spanish fluently, is head varsity golf coach at a local high school, enjoys golfing with friends, and is an experienced helicopter pilot. To accomplish all that, along with running a successful advisory, requires serious discipline.

Patriot Wealth Management had initially partnered with LPL Financial for a 14 year stint, up until the time the company had grown to about 1,200 advisors. Around that time von Känel was ready for a change, thinking LPL had lost its ability to serve its expanding pool of advisors in a personal way and leaving him to feel that his practice was treated like a number. So, he moved his business to Summit Advisory Group, which at the time was a boutique firm that offered him the chance to stand up and be recognized while developing his own unique practice.

For most of von Känel’s nine years with Summit, his practice enjoyed the freedom and support they were looking for. As his practice grew, it became known as the independent advisory that guided clients in pursuing goals and preserving legacies through measured and perpetual discipline. Even as Patriot grew, Summit went through their own changes that led them to be acquired by Cetera.

These changes prompted von Känel and his team to start looking at options.

von Känel asked other advisors about how LPL had changed over the years he was with Summit, and liked what he heard. Advisors that had stayed behind encouraged him to give LPL a second chance, noting that even as the company had grown, its culture had become more personalized and advisor-focused. So, he reached out to his local LPL recruiter.

As von Känel began exploring the possibilities with LPL, he learned about its new mission and commitment to supporting its advisors so that they could support their clients. He thought that if this were true, Patriot Wealth Management could perhaps, once again, find the partnership a valuable one.

As the relationship progressed, he met with current management and saw, first-hand, how the firm was living up to its mission of taking care of advisors, so they can take care of their clients.

He made his decision. “I do see it, I do feel it. They are genuine about helping us out,” said von Känel, noting that once he decided to transition his practice back, LPL’s transition team was helpful in moving the assets of Patriot Wealth Management over.

Now that the move has been made, von Känel and his team are happy they returned. He notes that LPL technology has improved, citing Clientworks, the single sign-on dashboard for advisors as a favorite for his tech savvy team. “The technology and resources are of tremendous value to me and my staff, but it’s the transformation of the company culture that is the driving force behind us coming back,” said von Känel.

von Känel sees himself as a mentor to his staff and an educator to his clients, and he doesn’t take either role lightly. His goal is to show people how to build a portfolio that will last a lifetime by focusing on growth and rebalancing regularly, while never forgetting that every client is unique. He feels supported by LPL in this focus.

von Känel is clear that returning to LPL was the right decision for him, his family and his practice. He recognizes that LPL has gone to great lengths to enhance its support for advisors, and sees that no matter the size of his business, once he became a partner of LPL, he became part of a team that works together for everyone’s success.

“My clients chose me, and I want to make sure to deliver on their trust. I am dedicated to helping them plan for their future by educating them to make the best decisions for their unique needs,” von Känel said. “It’s important I have the support of a partner that contributes to that commitment.” He notes that, so far, 95% of his clients have come along, some who’d been with him during his first experience with LPL.

Von Känel says it’s the relationships he builds with his clients that makes his independent business a success, and his partner has to support those relationships. He knows LPL is committed to making investments in the technology and capabilities that will enable the Patriot Wealth Management team to address the evolving needs of their clients, and continue to build its business with long-term value in mind. Thankful, but not wouldn’t be possible without Monica Herrerra and staff.

This material was prepared by LPL Financial