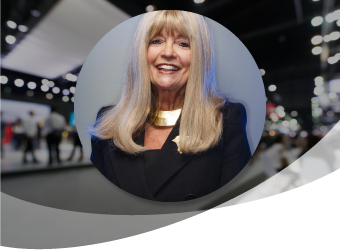 Susan Kaplan is one of LPL’s top producing advisors, and for decades has been a woman to watch in financial services. Today, all eyes were on her as the featured speaker at the 10th annual Focus on Women, a half-day symposium within LPL’s all-advisor conference, Focus. The symposium provided women advisors with personal and professional development opportunities and cultivates a community of women advisors.

With more than 30 years of experience as a financial advisor, Kaplan has consistently been one of the most successful women in the industry. She has appeared repeatedly on the Barron’s and Forbes lists of top producing women financial advisors and among the Barron’s list of top 100 financial advisors nationwide. Kaplan started her career as a nurse, spent 10 years as a stay-at-home mom while also earning her MBA, then launched her firm, Kaplan Financial Services, outside Boston, in the 1990s.

Kaplan spoke to more than 100 LPL advisors during the event about her unapologetic approach to business, at one point joking, “One of the other things I do that’s wrong,” before dispensing a wide-array of advice, including:

Barron’s Top 100 Advisors Award is based on assets under management, revenue produced for the firm, regulatory record, quality of practice and philanthropic work.

The Forbes ranking of America’s Top Women Wealth Advisors, developed by SHOOK Research, is based on an algorithm of qualitative and quantitative data, rating thousands of wealth advisors with a minimum of seven years of experience and weighing factors like revenue trends, assets under management, compliance records, industry experience and best practices learned through telephone and in-person interviews. Portfolio performance is not a criterion due to varying client objectives and lack of audited data. Neither Forbes nor SHOOK receives a fee in exchange for rankings.

The Forbes Best-In-State Wealth Advisor ranking, developed by SHOOK Research, is based on in-person and telephone due diligence meetings and a ranking algorithm that includes: client retention, industry experience, review of compliance records, firm nominations; and quantitative criteria, including: assets under management and revenue generated for their firms. Portfolio performance is not a criterion due to varying client objectives and lack of audited data. Neither Forbes nor SHOOK Research receives a fee in exchange for rankings.