Although we expect economic data may weaken in the coming months as coronavirus concerns grow, a full-employment backdrop coupled with healthy consumer confidence may help the United States weather a possible coming storm.

As the coronavirus continues to scare global markets, it would be easy forget that the current bull market started 11 years ago today. Based on investing fundamentals, we continue to believe we’ll see a resumption of economic growth and a continuation of this bull market into at least 2021, but worries are building. We highlight three reasons this bull market is alive and well, and three reasons it could be on borrowed time.

Three reasons the bull may make it to 12

As shown in FIGURE 1, currently this is the longest bull market on record, recently peaking at more than a 400% gain, but it still hasn’t topped the 419% advance from the 1990s bull market. We believe this bull market may eventually become the greatest bull ever, and we offer three reasons why we think this may be so.

Attractive valuations. One positive about the recent market weakness has been that stocks are now less expensive. The forward price-to-earnings (P/E) ratio for the S&P 500 Index recently dropped about 2 points from a multi-year high of 19 to 17. Considering the historically low interest rates and continued low inflation, we find stocks to be quite attractive for suitable investors at this point. 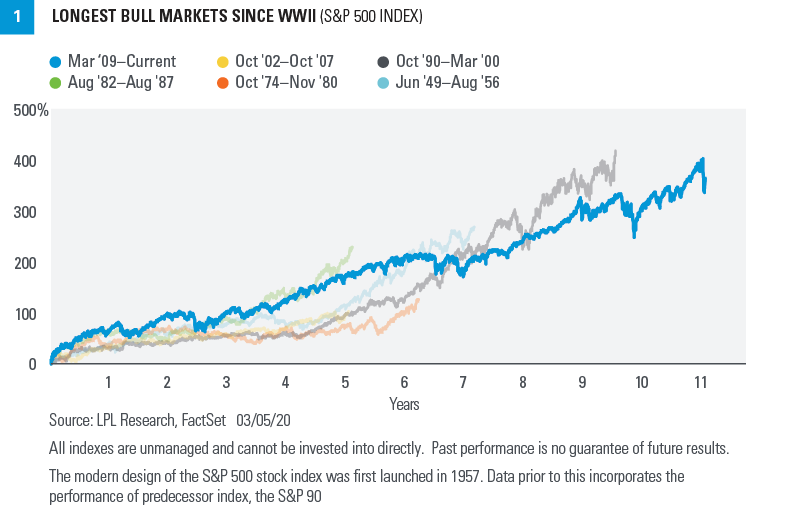 Additionally, S&P 500 stocks are near their most attractive valuations ever relative to US Treasuries, based on the equity risk premium (ERP). ERP compares the earnings yield on equities (or company profitability as a percent of share price) to the 10-year Treasury yield. Comparing the current S&P 500 earnings yield of 5.9% with the 10-year Treasury yield of 1% gives us an ERP of 4.9%. The long-term ERP average is 0.72%, suggesting stocks are extremely cheap relative to bonds. In other words, the earnings (or income) stock prices have been producing have been greater than those of bonds.

A healthy US consumer. In the face of scary headlines, the strength of the US consumer has remained quite impressive. Consumer spending makes up nearly 70% of gross domestic product (GDP) currently, so a healthy consumer would be necessary to keep this record-long cycle going.

Although we expect economic data may weaken in the coming months as coronavirus concerns grow, a full-employment backdrop, as evidenced by the strong jobs report March 6, coupled with healthy consumer confidence may help the United States weather a possible coming storm. Additionally, the economy has been on a clear upswing the past few months, as highlighted by the Institute for Supply Management (ISM) non-manufacturing activity index jumping to a fresh new yearly high in February. The services sector makes up about two-thirds of US economic activity, and the report showed the impact of the coronavirus has been minimal in that sector thus far. But will American consumers go to the movies, out to dinner, or travel if the virus continues to spread in our country? That’s the big question—but the US consumer has been counted out before and has always been resilient.

Divided government. The US presidential election has many investors wondering what the outcome could mean for their portfolios. The truth is, we’ve experienced bull markets and bear markets under both Democratic and Republican presidents.

We would instead focus on the makeup of Congress, which we expect to still be split into two parties after the election in November. When Congress has been split, the S&P 500 historically has returned an average of 15.9% under a Democratic president and 17.9% under a Republican president. If this scenario plays out in November as we expect, it may be another feather in the bull’s cap.

Three reasons the bull may not make it to 12

Here we offer are three reasons why we think this bull market may not make it through another year:

The coronavirus. The spreading epidemic has put a halt to the Chinese economy, and we anticipate other countries may see similar slowdowns in the coming months. Although our base case is the virus eventually may be contained and growth may accelerate in the second half of the year, if things were to get much worse, a new bear market may be entirely possible.

Based on what we know now, we estimate that the outbreak may trim roughly 0.25–0.5% from US GDP over the next couple of months due to global supply chain disruptions, falling export demand, and decreased tourism. On top of that, lower stock prices may hit consumer confidence and create a negative wealth effect. We still believe our 1.75% US GDP growth forecast for 2020 may be achievable, but our latest global GDP growth forecast of 3.5%, as noted in our Outlook 2020 publication, may be too high, considering the recent economic hits from China, South Korea, Japan, and Italy.

The reality is we simply don’t know the eventual impact of the coronavirus on the markets and economy, and that uncertainty could be what may spark an eventual bear market.

This bull market can’t go forever. Eleven years is a long time for a bull market to run. One final reason to expect this current bull market to end is the simple fact that it has to end eventually. Although fundamentals suggest the bull market can make it to 12 years, a 20% correction at some point in the next year after a 400% gain wouldn’t be overly surprising.

As a reminder, in both 2011 and 2018, stocks barely missed being down 20% before rebounding back to eventual new highs. Additionally, after the recent market sell-off, the S&P 500 has been trading near levels similar to where it was back in early 2018. While this might feel like an invincible bull market, it has had many scares along the way.

This material is for general information only and is not intended to provide specific advice or recommendations for any individual. There is no assurance that the views or strategies discussed are suitable for all investors or will yield positive outcomes. Investing involves risks including possible loss of principal. Any economic forecasts set forth may not develop as predicted and are subject to change.

References to markets, asset classes, and sectors are generally regarding the corresponding market index. Indexes are unmanaged statistical composites and cannot be invested into directly. Index performance is not indicative of the performance of any investment and do not reflect fees, expenses, or sales charges. All performance referenced is historical and is no guarantee of future results.