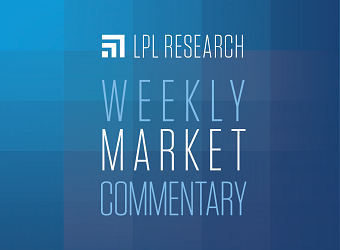 LPL Financial Research believes the fundamentals of the economy — corporate profits, interest rates, and inflation — will put a floor under the stock market before this pullback gets much worse.

Welcome to the updated LPL Research Weekly Market Commentary, which incorporates a cleaner, more streamlined look along with our informed insights on what’s happening in the markets now.

Stocks endured significant volatility last week but showed some resilience Wednesday, August 7, when the S&P 500 Index dropped as much as 2% intraday before rallying back late to close slightly positive. Stocks ended the week near flat, putting the S&P 500 about 3% away from its record high.

Escalating trade tensions drove the volatility. In response to President Trump’s latest tariff threat, the Chinese central bank allowed its currency (the yuan) to weaken below the psychologically important 7 per dollar level considered a line in the sand.

Unfortunately, both sides may inflict more pain on each other before we see progress. China has other ways to retaliate besides its currency, as does the United States. (A weaker currency helps make Chinese exports cheaper and helps offset the impact of tariffs). We listed several possible retaliatory actions in our August 7 blog, Is a Trade Deal Still Possible?. China’s reluctance to make structural changes to its markets, U.S. restrictions on Chinese telecom giant Huawei, and President Trump’s refusal to remove tariffs remain key sticking points.

While it may take time to re-establish trust to pave the way for progress, we expect self-interest to bring the two sides back to the negotiating table before long. Keep in mind the 2020 campaign season is approaching, and economic uncertainty and stock market losses possibly could hurt President Trump’s re-election chances.

Last week’s stock market volatility was a bit jarring after a period of relative calm and a series of new highs. It’s important to keep in mind the S&P 500 spent much of June below where it is now. Also recall that LPL Research made the decision to go to market weight equities in late March 2019 when the S&P 500 was near 2,850. With fundamentals little changed, we don’t see any reason to get more negative on equities if we were to return to that level or even lower.

Also keep in mind that even in positive years, the average peak-to-trough decline in the S&P 500 has been 11% (based on data back to 1950) [Figure 1]. The biggest drawdown year to date has been 7%, based on closing prices. Volatility this year has been below average thus far. Pullbacks of 5–9% are common—we have had three per year on average. We would view these downdrafts as opportunities for suitable investors to consider rebalancing or potentially add to equity positions if appropriate.

THE FED IS OUR FRIEND

The Federal Reserve (Fed) is clearly the market’s friend right now. Rate cuts often come in bunches, and we believe we are likely to get one or possibly two more cuts by year-end, in addition to the one on July 31. Historically, initial rate cuts in economic expansions have preceded strong stock market performance. In fact, the last five initial rate cuts by the Fed (back to 1984) in expansions were followed by the S&P 500 gaining an average of 16% over the next 12 months. If stocks are going to return to recent highs, Fed support will be part of the story.

We believe the fundamentals of the economy—corporate profits, interest rates, and inflation—will put a floor under the stock market before this pullback gets much worse. Consumer spending remains solid, supported by a strong job market and rising wages. The Federal Reserve is at our backs. Interest rates and inflation are low. Earnings season has been better than expected. We urge patience on trade while acknowledging the risk that the dispute may drag into 2020. We maintain our year-end fair value target on the S&P 500 in the range of 3,000, about 2% above current levels.

The economic forecasts set forth may not develop as predicted, and there can be no guarantee that strategies promoted will be successful.

Investing involves risks including possible loss of principal. No investment strategy or risk management technique can guarantee return or eliminate risk in all market environments

Rebalancing a portfolio may cause investors to incur tax liabilities and/or transaction costs and does not assure a profit or protect against a loss.

The Standard & Poor’s 500 Index is a capitalization-weighted index of 500 stocks designed to measure performance of the broad domestic economy through changes in the aggregate market value of 500 stocks representing all major industries. The modern design of the S&P 500 stock index was first launched in 1957. Performance back to 1950 incorporates the performance of predecessor index, the S&P 90.