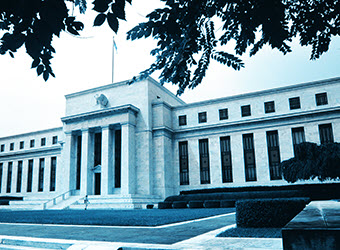 Central Banks Are Back

In the last two years we’ve seen the return to central bank dominance, particularly by the U.S. Federal Reserve, which has significant implications for global markets.

We expect one more rate cut in 2019 and for markets to continue to follow the central bank’s lead. That means stocks and bonds may be well supported.

Since we began highlighting the return of fiscal leadership as a primary driver for economic and market activity nearly two years ago, we’ve seen the return to central bank dominance, particularly by the U.S. Federal Reserve. This has significant implications for global markets.

After a decade of easy money, the 2017 Tax Cuts and Jobs Act provided incentives for investment, and in 2018, the regulatory environment had eased and additional government spending programs further boosted demand. In fact, in our 2018 Outlook: The Return of the Business Cycle, we highlighted the return of fiscal leadership as a primary driver for economic and market activity. The improved growth environment led to a tighter monetary stance from the Federal Reserve (Fed) in 2018, even as the contentious trade environment diminished business investment.

Fast forward to today, and the U.S.-China trade confrontation persists. The fiscal tailwinds of taxes, regulation, and spending have been no match for trade headwinds. The result: A return of central bank dominance, highlighted by the U.S. Federal Reserve, which lowered interest rates again last week. As shown in [Figure 1] the Fed is not alone, as the trade environment has weighed on global growth, prompting the European Central Bank (ECB), the Bank of Japan (BOJ), and the People’s Bank of China all to take accommodative actions in recent weeks amid the mountain of global negative-yielding sovereign debt, which we also discussed in The Curious Case of Negative Yields last week.

As expected, the Fed cut rates by 0.25% September 18 and made minimal changes to its statement. But disparate views on policy were notable. There were three dissenters—two members of the Fed policy committee voted to hold rates unchanged, and one wanted a larger 0.5% cut. Only 7 of 17 members expressed the view that rates should be cut again this year, introducing more uncertainty about the next cut even though bond markets still expect another one this year.

The strong characterization of the U.S. economy was also notable. In fact, the Fed slightly increased its U.S. economic growth forecast for 2019, despite weakening business fixed investment and exports. We expect one more rate cut in 2019 and for markets to continue to follow the central bank’s lead, in the absence of meaningful news on trade. That means stocks and bonds may be well supported.

At the conclusion of the ECB’s September 12 meeting, Mario Draghi, the outgoing head of the ECB, announced a dramatic series of steps that cemented his legacy, also marked by his famous 2012 “whatever it takes” quote. The ECB cut its target interest rate further into negative territory by 0.1% to -0.50% and committed to purchasing 20 billion euros ($22 billion) of Eurozone debt each month until inflation achieves the central bank’s target of just under 2% growth. The ECB, and Draghi’s successor Christine Lagarde, are now committed to policy accommodation that could potentially last years.

The ECB joins central banks around the world in cutting interest rates in response to slowing global growth caused by the U.S.-China trade conflict. Export-dependent Eurozone economies, particularly Germany, have weakened, leading to persistently low inflation on the European continent. Prospects of a no-deal Brexit at the end of October could place further pressure on output growth.

MORE STIMULUS LIKELY AHEAD FOR THE BOJ

The BOJ decided against additional policy stimulus at its meeting last week, but it did indicate it will review its assessment of its economy and inflation next month, sparking speculation that more easing measures may be forthcoming. Monetary officials have suggested they are open to the idea of further reducing interest rates into negative territory in response to weaker global growth, and they likely want to get ahead of any economic weakness resulting from a consumption tax increase slated for October.

BOJ Governor Haruhiko Kuroda has previously highlighted four strategies to push rates lower: cutting short-term rates (currently at -0.1%), lowering the target yield for the 10-year government bond (currently 0%), expanding purchases of other assets such as stocks, and further expanding the monetary base. However, monetary officials also need to maintain a delicate balance by providing an upwardly sloping yield curve and supporting positive returns for life insurers and pension funds.

Despite the slowing Chinese economy, the People’s Bank of China (PBOC) chose to inject 200 billion yuan (roughly $28 billion) into its banking system last week rather than lowering its policy rate, disappointing some market participants. Policymakers are struggling with trying to balance stimulating growth through accommodative policies while limiting the perception of currency manipulation amid the ongoing trade conflict.

The return to central bank dominance, particularly by the Fed, has significant implications for global markets. In this rate-cutting environment, we will continue to favor stocks over bonds, large cap stocks over small, a balance between growth and value, cyclical sectors over defensives, and emerging markets over international developed. In our view, active management strategies may struggle relative to passive approaches until fundamentals can reassert themselves.

Because of its narrow focus, specialty sector investing, such as healthcare, financials, or energy, will be subject to greater volatility than investing more broadly across many sectors and companies.