Better Days Ahead for Bonds

LPL Research sees better days ahead for bonds. 2019 was a baffling year for bonds, but we’ve seen some improvement in long-term yields. Bonds can still play a role in helping to diversify portfolios where appropriate.

We were concerned by the yield curve’s inversion, but we maintained it was more a sign of too tight monetary policy for ongoing trade uncertainty, instead of a sign of an imminent recession.

2019 was a baffling year for bonds. The 10-year U.S. Treasury yield fell to a three-year low, and the yield curve flashed ominous signals about the economic outlook. We’ve seen some improvement in long-term yields since the September low, but we don’t expect much more upside in 2020. However, bonds can still play an important role in helping to diversify portfolios where appropriate.

THE YEAR IN REVIEW

One of our biggest challenges in 2019 was explaining the bond market’s baffling signals. Many firms—including ours—kicked off 2019 with expectations of rising rates after the Federal Reserve’s (Fed) December 2018 rate hike.

Then, the macroeconomic environment made a turn. Trade tensions between the United States and China intensified, and global economic data deteriorated. Global fixed income investors turned to U.S. Treasuries for income, safety, and liquidity, adding more pressure on yields. The 10-year U.S. Treasury yield fell to a three-year low of 1.46% on September 4, and the Treasury yield curve inverted (long-term yields falling below short-term yields) [Figure 1]. As this happened, we emphasized in our communications that the bond market was becoming disconnected from U.S. economic fundamentals. Thankfully, the Fed eased tensions with three straight rate cuts from July to October. Policymakers’ actions seem to have renewed investors’ confidence. 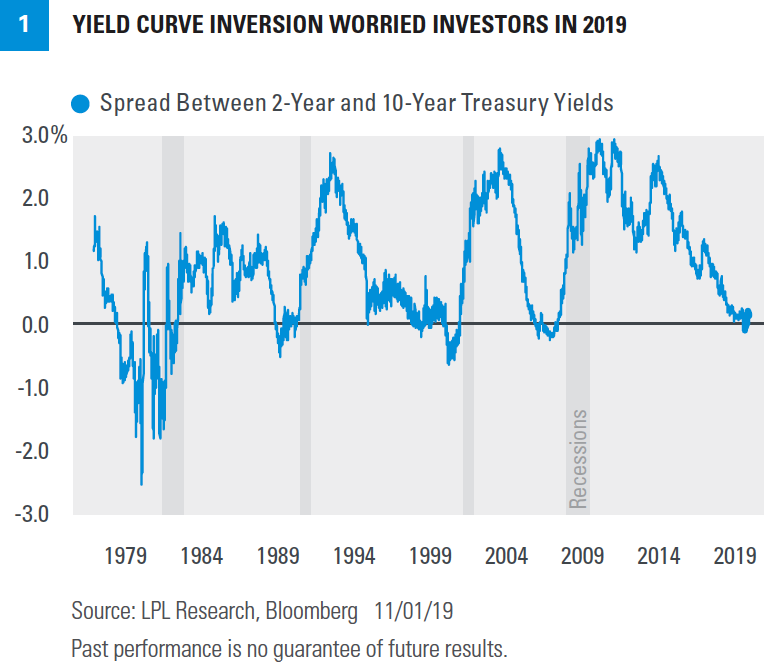 We expect the 10-year yield to end 2020 in a range of 2–2.25%. Long-term yields could creep higher in 2020 as global economic conditions improve and Treasury buying eases. Still, we expect the gap between U.S. and international yields to persist, and global buying pressure to keep a lid on U.S. yields. Global yields may stay unusually low until growth and inflation pick up materially in Europe and Japan. Unfortunately, with the benefits of monetary policy largely exhausted, that may take a while.

The Fed remains an integral part of this story. Policymakers paused on rate cuts at the December 2019 meeting and projected near-trend economic growth and consumer inflation below 2% in 2020. Growth in line with our outlook would not necessarily require any further cuts, but contained inflation would give the Fed more flexibility. We believe continued Fed flexibility should provide enough support to the economy to foster a modest increase in longer-term yields.

We were concerned by the yield curve’s inversion, but we maintained it was more a sign of too tight monetary policy for ongoing trade uncertainty, instead of a sign of an imminent recession. The steepening of the yield curve in the latter half of 2019 provided evidence supporting this case. We also think the unusual rate environment has made the yield curve’s economic signaling less meaningful than it has been in the past.

We see even modest steepening of the yield curve in 2020 as supportive of continued economic expansion. The yield curve is historically flat, though, and it could be prone to inverting again if there’s a significant breakdown in U.S.-China trade negotiations. If that happens, we’ll be watching for either the spread between the 3-month and 10-year yields to fall below -0.5%, or for the 2-year and 10-year yield spread to remain inverted for 90 days. In the past, those occurrences have been more predictive of a near-term recession.

Muted yields and late-cycle economic growth could be a tricky environment for fixed income investors to navigate in 2020. At the very least, they probably shouldn’t expect a repeat of this year’s performance in which the Bloomberg Barclays Aggregate Bond Index (Agg) has risen 8.6% year to date and is poised for its best year since 2002.

We continue to emphasize a blend of high-quality intermediate bonds in tactically oriented portfolios for fixed income allocations. Even though we predict yields will climb modestly higher (pushing bond prices lower), the “coupon” income that bonds provide could lift the Agg to low-single-digit gains in 2020.

We also continue to recommend a cautious approach to corporate bonds, which are traditionally more credit-sensitive. Economic growth just below 2% could support corporate profits and companies’ ability to service their debt, but moderate inflationary pressures could offset these benefits for corporate bond investors. A “coupon-clipping” environment in which interest payments largely drive returns, may still aid suitable investors.

Treasuries appear richly valued, but the yield advantage over international government bonds and expectations of only modest rate increases argue against a significant underweight compared with benchmarks. For suitable investors, mortgage-backed securities (MBS) could act as a source of yield that may be better suited for modestly rising rates, and in our view, MBS valuations have become more attractive relative to other high-quality bonds.

U.S. Treasuries may be considered “safe haven” investments but do carry some degree of risk including interest rate, credit, and market risk. They are guaranteed by the U.S. government as to the timely payment of principal and interest and, if held to maturity, offer a fixed rate of return and fixed principal value.

Bond yields are subject to change. Certain call or special redemption features may exist which could impact yield.

Credit Quality is one of the principal criteria for judging the investment quality of a bond or bond mutual fund. As the term implies, credit quality informs investors of a bond or bond portfolio’s credit worthiness, or risk of default. Credit ratings are published rankings based on detailed financial analyses by a credit bureau specifically as it relates the bond issue’s ability to meet debt obligations. The highest rating is AAA, and the lowest is D. Securities with credit ratings of BBB and above are considered investment grade.