Consumer spending has upstaged business investment this year, mainly due to uncertainty over trade, but we’re optimistic a trade deal will be reached soon. Global economies are showing signs of recovery.

U.S. consumers are spending at a solid rate, which we expect to continue through the important holiday shopping season that is rapidly approaching. U.S. businesses, on the other hand, are not opening up their wallets, and capital expenditures (capex) growth has stalled. Consumer sentiment has remained elevated through most of this year, while gauges of business and chief-executive-officer confidence have declined to three-year lows.

There are a few tailwinds forming for business spending, though. We’ve seen a gradually improving relationship between the United States and China since early October, as both parties are reportedly interested in signing a limited trade deal to avoid future tariffs. Recent data shows global manufacturing may be bottoming, a key sign of recovery for the global economy.

Optimism that “phase one” of the trade deal with China could still be signed in 2019 remains high. As the LPL strategists discuss, it’s very likely that tariffs will be rolled back on each other’s goods. U.S. companies are holding back on further investment until they have guidance over trade, which is making the need to get a deal in place quite high. Additionally, Chinese economic data is weakening and inflation is spiking, increasing the odds they want a deal as well.

The S&P 500 made new highs recently, yet we are seeing many international countries break out as well. Recently there have been new highs in the United States, India, Canada, and Switzerland, while new 52-week highs have taken place in France, Germany, Greece, Japan, the Netherlands, Russia, and Taiwan. This is much different than this time last year, when the U.S was holding strong yet the rest of the globe was quite weak. 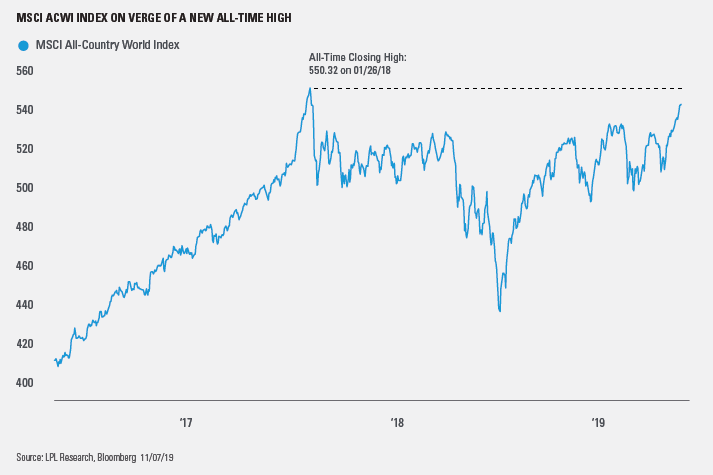 The MSCI All-Cap World Ex.-U.S. Index has returned 9.1% since August 19, outpacing the S&P 500 and Russell 3000 Index by about 3 percentage points over that period, and is on the verge of a breakout to new record highs, its first new high in nearly two years.