The calendar comes into focus as LPL Research strategists discuss ongoing geopolitical concerns and potential impact on stocks, new jobs and earnings reports, and what the first 5 days of January may tell us about the rest of 2020.

So far in 2020, geopolitical concerns have dominated discussions, yet stocks continue to make new highs. The LPL strategists share their perspectives on how geopolitical events can impact stocks and why the economy continues to appear solid.

After the United States killed a top Iranian military general, many were on watch for a big escalation in the Middle East. Although calmer heads have prevailed for now, there is always a chance things could change quickly. The LPL strategists look at the 20 most significant geopolitical events dating back to World War II and discuss that, on average, the S&P 500 Index fell about 5% 3 weeks after each event — but within 2 months those losses were recovered and new highs were achieved.

The employment backdrop continues to be quite healthy, as nonfarm payrolls rose 145,000 in December, a tad beneath expectations. The late Thanksgiving holiday likely played a part in the miss, and the strategists expect strong numbers in February as a result. In 2019, 176,000 jobs were created per month, a lower number than in 2018, but still quite an impressive feat this far into a more than 10- year cycle of growth. The other positive is that wages grew at 3% in 2019, still well beneath the 4% threshold that has marked the top line in the previous 3 economic cycles.

Fourth quarter earnings kick off this week, and the consensus is these earnings could be slightly lower year over year. But as the LPL strategists note, forward guidance will have everyone’s attention. Earnings are expected to be up nearly 10% in 2020, and although we think that could be a little high, a solid rebound in earnings for 2020 is in the playbook.

Many on Wall Street like to highlight how the first 5 days of a new year have shown a solid track record of predicting what could happen in the year ahead. Well, the S&P 500 Index was up 0.7% after 5 days in 2020, and history shows us that when these 5 days were in in the green, the full year was higher 80% of the time. Compare this to when the first 5 days were in the red, and the full year was higher only 60% of the time. Last, when the first 5 days were up at least 2%, the full year has been higher an incredible 16 of 17 times. Yes, we will use this with a grain of salt and are aware of how “noisy” this study might be, but we still think it may be a feather in the cap for the bulls in 2020. 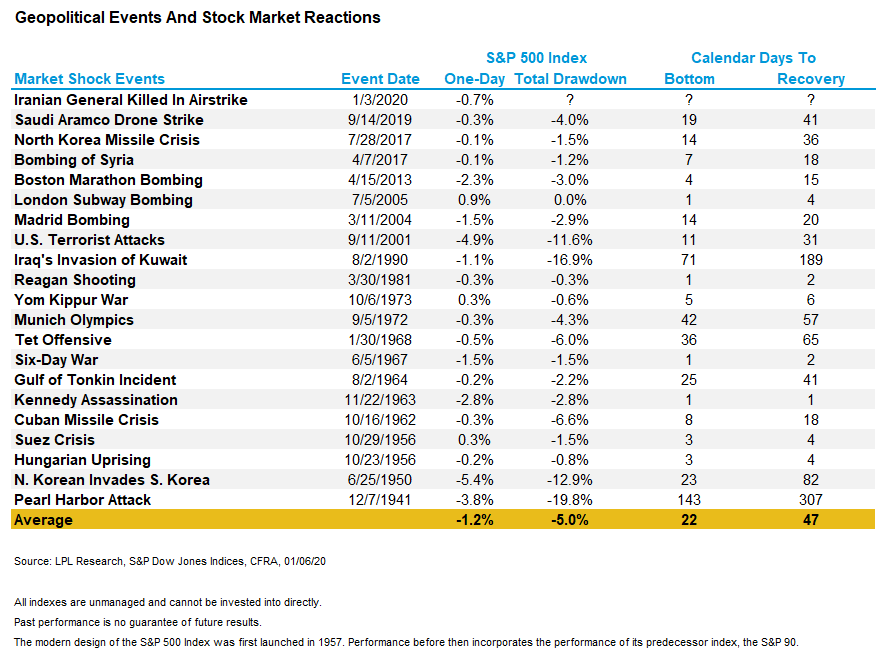 The opinions voiced in this material are for general information only and are not intended to provide specific advice or recommendations for any individual security. To determine which investment(s) may be appropriate for you, consult your financial professional prior to investing. The economic forecasts set forth in this material may not develop as predicted.