Recent jobs reports, manufacturing data, and incremental progress on trade have delivered mixed results, but the one thing that appears certain is that uncertainty in the markets is here to stay.

Last week marked the first time ever the S&P 500 Index has started off the fourth quarter with back-to-back 1% drops, as the global slowdown continues to impact global markets.

The Institute for Supply Management’s (ISM) Purchasing Managers’ Index (PMI) fell to 47.6 in September, the lowest level since June 2009. The United States economy had been holding up well, even as the rest of the world’s economies slowed, but our pace may be changing too.

The good news is the U.S. consumer still appears quite healthy: The U.S. services sector is still expanding, and September nonfarm payrolls rose 136,000, a good gain but below consensus expectations for a 145,000 gain. However, July and August’s payroll gains were revised up by 45,000 each, which boosted the 12-month average payrolls change to 179,000. Because consumer spending, which makes up nearly 70% of overall gross domestic product (GDP), remains strong, we still don’t see a recession on the horizon.

Geopolitical matters have complicated the tug-of-war between fiscal and monetary policies and contributed to near record levels of economic uncertainty. From Brexit to weakening manufacturing, the new consumption tax in Japan, trade talks between the United States and China, tensions with North Korea, and policy from the Federal Reserve, it is clear we are living in uncertain times. As the LPL strategists discuss throughout the podcast, previous instances of high uncertainty actually have led to higher than average market returns. Historically, good news has led to strong buying.

The United States and China are set to begin high-level trade discussions in Washington, D.C. later this week. Although we don’t expect any major announcement, it could be a precursor for the important Asia-Pacific Economic Cooperation (APEC) Summit in November, where LPL strategists expect President Trump and China’s Present Xi to meet face to face and potentially announce progress. We still expect an interim deal sometime in the first quarter of 2020; however, the increasing focus on impeachment could slow progress on another trade pact, the United States-Mexico-Canada Agreement (USMCA), also known as NAFTA 2.0. 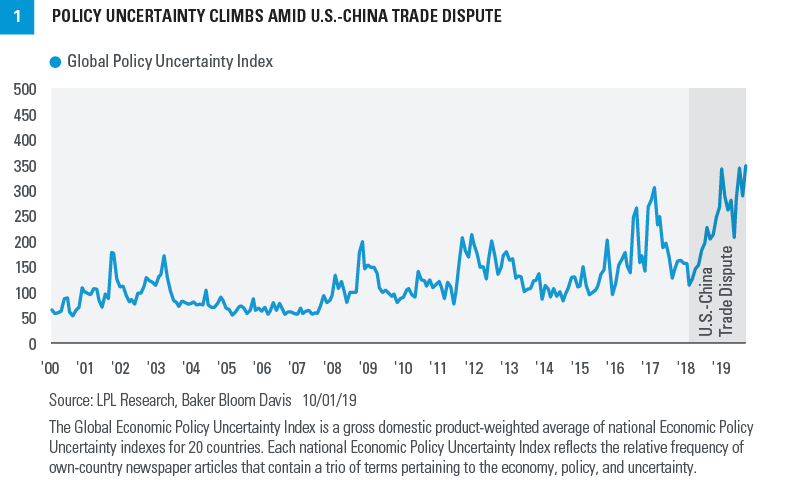